He Did His Duty 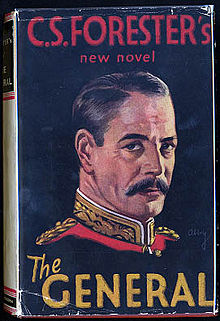 I have read most of C. S. Forester’s books, but had never come across The General until I found a copy last year in a second-hand shop. It nestled next to a biography of Winston Churchill written in 1940 (which was also fascinating). This was something of a coincidence, because in 1941, as he crossed the Atlantic in the battleship Prince of Wales for his ﬁrst meeting with Roosevelt, Churchill read three of Forester’s Hornblower novels. Hornblower – hardworking, auda­cious, full of initiative, demanding but careful of his men – would have been for Churchill the perfect model of what a military man should be.

However, I feel the Prime Minister should have been reading The General. This would better have prepared him for the many disap­pointments which the British Army, and in particular its leaders, brought him throughout the course of the war, and might have given him an understanding of why our armies so often underperformed.

Lieutenant-General Herbert Curzon, KCMG, CB, DSO, is presented to us in his bath chair on the seafront at Bournemouth, where newcomers hear from locals about his brilliant career. ‘He wears his position with dignity, and is generous with his smiles, so that his pop­ularity is great although he plays a bad hand of bridge.’ It is a brief but endearing introduction to a much-loved and respected old soldier. Forester then tells the story of the man, how he acquired his position and his fame, and at what cost. We ﬁrst meet the young Curzon as a lieutenant commanding a squadron of cavalry in the Boer War. He is only in command because senior ofﬁcers have fallen ill and his immediate superior is lying dead at his feet. His squadron is dismounted and under ﬁre, but he cannot tell from which of the many rocky outcrops the ﬁre is coming. He does not know what the squadron’s orders are, is unsure where the remainder of the British force is and does not have a clue what to do. However, he realizes that his men are nervous. He walks along the line to steady them, quite unaware of the bullets whistling past him. Prod­ded by his sergeant into making a decision, and conscious of the difﬁ­culty there will be in controlling the men once they have run out of ammunition, he orders the squadron to remount and then leads them away down a gully so that they are out of sight of the enemy.

This is the moment at which life changes for Lieutenant Curzon. The gully eventually leads the squadron, circuitously and unseen, to a position on the enemy’s ﬂank. The squadron mounts, levels lances and charges, scattering the Boers. The infantry advance and the battle is won. Curzon is awarded the DSO and promoted to Captain. He has in those few minutes established a reputation for gallantry and leader­ship which will follow him for the rest of his career and will lead him in due course to command an army corps in Flanders.

I have read many books about the Great War, and criticism of the British Army’s leadership is a constant theme. Forester provides a fairer picture. These men, he suggests, were not wicked. They were honourable and courageous. But they were products of their time, and were ﬁghting a war in the only way they knew. Curzon is just such a man. As Forester tells the story of his career I felt simultaneous admir­ation for the man, distress at the consequences of his leadership and anger at the system which had allowed them to occur. There is no doubting Forester’s own anger at the destruction of his generation of young men, but he writes more in sorrow than in anger. He blames those in charge for the carnage: ‘[they] had never learned any lessons from history, had never learned what resources modern inventions had opened to them, with the consequence that men had to do at the cost of their lives the work which could have been done with one-quarter the losses and at one-tenth the risk of defeat if they had been adequately armed and equipped.’

I would probably have hated Curzon if we had met. He is a bit of a snob, and he treats his poor aunt and nephew unfeelingly. He is a typical product of his restricted upbringing, his interests limited to the Army and hunting. He rejects suggestions from young subalterns – ‘theorists!’ – that in future war might be different, that machine guns and aeroplanes might make the role of the cavalry redundant, because he knows that the cavalry has always had a vital role to play in battle.

Yet when we see Curzon off-duty we learn more. He meets Lady Emily Winter-Willoughby and is conscious of a likeness between her features and those of his favourite polo pony. This doesn’t put him off, it’s merely a reminder that they share a love of hunting and horses. Herbert and Emily are swiftly engaged, and their marriage takes place under the media spotlight; he is a war hero, and she the daughter of a duke. Their wedding night is a less happy occasion, but this is as comfortable a marriage as the two could have expected, bearing in mind their upbringing. Curzon’s greater devotion is to the Army and his duty, but he still cares for his wife.

The vignettes of Emily, her ducal parents, the War Ofﬁce and the General Staff are splendid, and very often amusing. Curzon is an innocent abroad in the politics of war, and his promotions come not through any ambition or cunning but simply because he is the man who showed leadership one afternoon in South Africa long ago. He may be unimaginative and hidebound in his beliefs, but he is straight-forward, honourable and hard-working.

At the outbreak of the Great War he takes his regiment to France as the Germans advance through Belgium and France. Forester vividly captures the misery of these weeks, as Curzon’s division is ﬁrst ordered from one place to another in the chaos behind the lines and then shoved into the line to ﬁll a gap at Ypres. His men have no experience of infantry ﬁghting, and nor does Curzon. But he does understand his orders – to hold the line to the last man. This he conveys to his men by his own personal conduct.

From this baptism of ﬁre, in which his regiment is destroyed, Curzon emerges unscathed and with an enhanced reputation for doing as he is told. Promotion and the Somme follow, and then more of the same. However, this is not a book about battles which, though wonderfully well portrayed, take up only a small part of the story. Forester did not serve in the war, having failed his medical, but I know of few writers of military ﬁction who are better able to convey what it must feel like to be on the front line or to command men in battle. Forester’s main concern is to show us the events of 1914–18 as Curzon might have experienced them, and by that means to show why the Great War was fought in the way it was.

There are libraries of good books dealing with the Great War, and more appear with every month that passes. But if you wish, in this anniversary year, to be given an insight into why it was such a disaster for the British Army, I can think of few which will be a better guide, or a better read, than the sorrowful tale of General Curzon. In Forester’s words: ‘It might have been more advantageous for England if the British Army had not been quite so full of men of high rank who were so ready for responsibility, so unﬂinchingly devoted to their duty, so unmoved in the face of difﬁculty, of such unfaltering courage.’ I found myself very moved by this tale of a good man who did his duty in the only way he knew.

Dick Russell is a semi-retired lawyer who now has time to catch up on the books he should have read. His reading of history has taught him that, even in civilian life, battles are usually won by the other’s failings rather than one’s own brilliance.

In case you haven’t yet come across it, Slightly Foxed is a rather unusual quarterly book review. For the past ten years it’s been introducing its readers to some of the thousands of good books that long ago disappeared from the review pages and often from bookshop shelves. Companionable and unstuffy, it has a wide range of contributors – some well-known, some not – who all write personally and entertainingly about the books they choose. It’s not so much a review magazine as a magazine of literary enthusiasms.

Single issues from £10; annual subscriptions from £40. For more, visit www.foxedquarterly.com