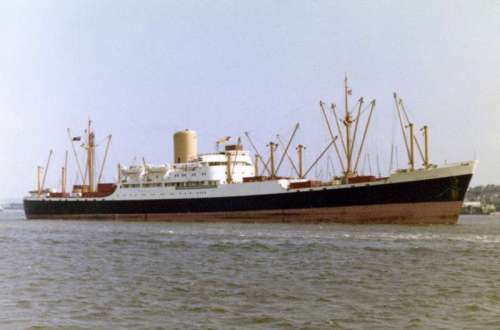 George Pringle wrote to us with a personal recollection: –

I am writing to let you know of an experience I shared with C.S. Forester in 1964.

I served for many years as an Engineer Officer in the Merchant Navy.  On some voyages from London to the west coast of the United States I worked on M.V “Loch Loyal”, a ship owned by Royal Mail Lines.  This was a cargo vessel but could also accommodate up to twelve paying passengers.

During one trip, leaving from the Royal Victoria Docks in London on the 12th of February 1964, we had on board as a passenger Mr Forester who was accompanied by a male nurse/carer.  On this particular voyage I was the Senior Second Engineer Officer on the ship.

Having passed through the Panama Canal and heading north off the coast of Southern California, on the 8th of March 1964, the ship suffered from an explosion in the engine room.  As well as causing serious injury to the Chief Engineer the ship was immobilised due to major damage to the main engine.  The vessel was adrift in the Pacific for many days whilst awaiting assistance from a tug which had to come from San Diego.  Under tow to Los Angeles the engine room staff worked night and day to repair the damaged main engine and the ship was able to enter port under her own power.

During his time on “Loch Loyal” Mr Forester regularly used the small swimming pool on the fore deck of the ship and I can recall quite clearly him enjoying being “tipped” into the pool from his wheelchair.

I cannot remember if Mr Forester left the ship in Los Angeles or if he remained on board until our next port of San Francisco.  On a subsequent visit to San Francisco Mr Forester got in touch with me to ask if one of his sons could visit the ship and be shown around the engine room.  This was arranged but, again, I cannot remember which of his sons it was except that having described to him in “idiot fashion” how a marine diesel worked it transpired that he appeared to know more about diesel engines than I did !

George Pringle
(Fellow of the Institute of Marine Engineering, Science and Technology)

In the second volume of ‘Novelist and Storyteller, John Forester recalls the episode. He writes: –

‘I received an unexpected letter from my father aboard a ship sailing from Rotterdam… This ship was scheduled to stop at Wilmington for 2 or 3 days “so it would be splendid chance to see you”… The ship arrived at night… and I went aboard the next morning, 2 July 1964. The local press was there interviewing my father… He talked of Hornblower, and of writing ‘Hornblower and the Crisis’ in his cabin… Then I was given a tour of the ship by the 3rd engineer, another Hornblower fan. Naturally, it was an engineering tour… I learned about operating and repairing the ship’s engines and associated equipment’