Report on the 2019 Annual Meeting in Dover, England.

The proximity of “Smallbridge”, the country residence in Kent of Hornblower and Lady Barbara during their later years, brought the Society to Dover this year for its annual meeting, held between 11th-13th October. The Dover Marina Hotel provided the base and we were able to use its excellent meeting room with a view of the sea and the almost continual arrivals and departures of cross-channel ferries, albeit often obscured by rain and mist.

The twenty or so members in attendance met for drinks at a bar in the hotel where old and new friends were met. Chairman Ludwig welcomed everyone. Later, we all travelled by bus to dine at an inn in the nearby village of Worth. According to Hornblower’s other biographer, C. Northcote Parkinson, Worth was where Hornblower grew up as the son of the local doctor and where, among other things, he learnt French and dancing from an emigre French nobleman and where he made up a four at whist with his father and the local minister and his wife. The village is also close to the sea and to the “Downs” near Deal where HMS Atropos was at anchor in the fog prior to sailing to Marmaris Bay in Turkey on a treasure hunt. The highlight of the “Traditional Castle Pie” dinner was an imposing pastry edifice protecting a delicious beef pie filling. Over dinner, at the behest of Ludwig, members read out their selections of “scenes of tenderness” as penned by C S Forester in a variety of his books. 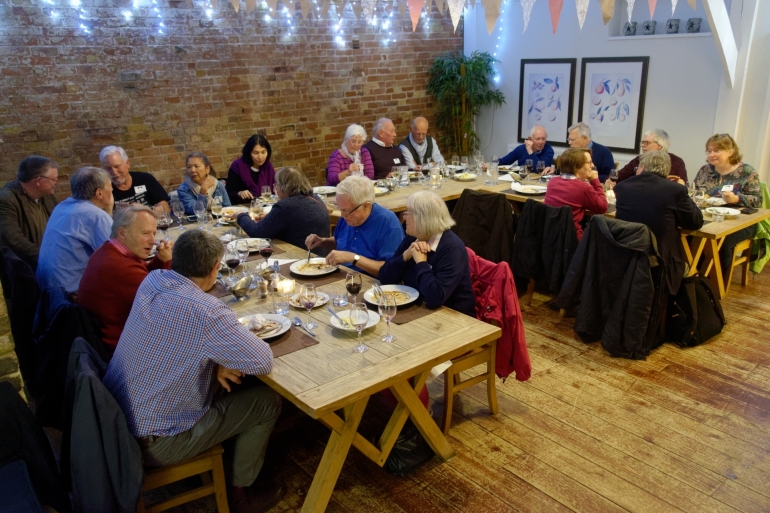 On Saturday morning, the formal AGM of the Society took place with a report from the Chairman, (business-like), the Webmaster, Nicolas Grigorellis (very funny), the Editor, Lawrence Brewer, (wistful) and the Treasurer, Sue Napier, (very efficient). In his report, the Chairman suggested that the Society should try to get back to a wider consideration of the books of C S Forester in addition to its main concentration on Hornblower. John Roberts conducted the election of officers for the new year with all the above being elected with the exception of Lawrie who had announced that he was standing down from his post for personal reasons. His work as Editor was roundly praised as he was thanked for all his efforts. His place as Editor is being filled by John Maunder.

With the formal business out of the way, Serge Aillery gave a very interesting and well- illustrated talk on “Napoleon’s planned invasions of England”. For many people, this talk was a revelation in that the seriousness of Napoleon’s intentions had not been fully appreciated. England could thank the Royal Navy for not being invaded.

Talking of the Royal Navy, the next presentation was given by Ken Napier and John Roberts who both spoke about the guns and ordnance used by the fleet at the end of the 18th century and the start of the 19th and with which Hornblower would have been all too familiar. Ken drew his talk from a paper he had written about carronades and which will be published shortly in Reflections Online.

After lunch, John Maunder and Ludwig Heuse spoke about finding the location of Smallbridge with Nicolas Grigorellis providing support in the form of projected maps and bullet points. C S Forester had mentioned Smallbridge in four of his Hornblower books (The Commodore, Lord Hornblower, Hornblower in the West Indies-The Hurricane and finally in Hornblower and the Crisis-The Last Encounter). However, most of the clues given were contradictory but again, using the writings of C Northcote Parkinson, the Kent village of Nettlestead, about an hour’s bus trip from Dover was chosen as the venue for the rest of the afternoon’s meeting. Lawrie Brewer had made contact with the owner of a large country house which could have been, (but wasn’t), Smallbridge. At the house the members were introduced to its owners, Mr and Mrs Tucker. Old correspondence between Parkinson and Mr Tucker was read out by him and just for a while we all could imagine what could have been the home of the Hornblowers. The reality was that Smallbridge only existed in the mind of Mr Forester.

That evening, back in Dover, dinner was taken near the hotel at Cullin’s Yard restaurant and very convivial it was.

On Sunday morning, Dirk Scholten gave an online presentation for a future meeting of the Society on the subject of “CSF as a master of the short story”. As Dirk pointed out, most of these stories are superb.

Prior to the meeting adjourning to a guided tour of part of Dover Castle, Chairman Ludwig formally brought this year’s meeting to a close. He thanked everyone for attending and particularly thanked those who had helped to arrange the location, visits, transport and food and drink and everything else. He also asked for any suggestions for the 2020 venue and he quickly had a list comprising London, Riga, St Petersburg, Gibraltar, Marmaris Bay in Turkey and the Gironde. In return, Ludwig was thanked for his leadership and direction.

A resounding success in Dover, we now look forward to the 2020 meeting!