Members of the Society who attended our 2017 meeting in Stockholm will recall with pleasure Ron Meister’s closing presentation about some of the real-life characters and events appearing in the Hornblower stories. Here it is , exactly as we heard it that evening: –

Good evening.  My name is Ron Meister.  Thank you to Ludwig and to our Swedish hosts for arranging this wonderful conference, and for allowing me a few minutes to speak to you.  In real life I’m a lawyer in New York.  I’ve been reading C.S. Forester for over fifty years.  When I was in the United States Navy, the only books I had on my desk were the paperback editions of Hornblower, which I used for legal research.  When I learned that there were five Hornblower short stories not in the books, and one of them could be found only in the British Library, I had to come to London and become a member of the British Library to read it.  And to do that, I had to convince the Library that I was a scholar.  So I’m happy to tell you that while to most people I am just another New York lawyer, to this honorable group I am a certified Hornblower scholar. 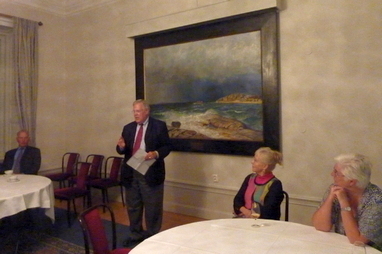 In English, hermeneutics is the branch of knowledge that deals with interpretation of literary texts.

So, I’ll be talking about historical interpretations of Hornblower literature, specifically with regard to Commodore Hornblower.

So, hermeneutically speaking, Commodore Hornblower is notable for being the first of the stories that makes significant use of actual historical figures.

Lord St. Vincent, by the way, when he was First Lord of the Admiralty, was a member of the House of Lords.  And he was asked during the course of a debate whether the French would be able to invade England.  In response, he said, “I do not say they cannot come.  I only say they cannot come by sea.”

In any event, before Mr. Forester wrote The Commodore, he had written only the three Captain Hornblower books, in which the major characters were fictitious.  Besides Hornblower himself, and Bush and Brown: they were El Supremo, the sort of Boris Johnson of his day; the Comte de Gracay, who I think could be played by your Max von Sydow; and Lady Barbara, the relative of a powerful national figure, a kind of Hillary Clinton.

It is true that at the very end of Flying Colours, the future Lord Palmerston makes a brief appearance at the Foreign Office; and Hookham Frere, who escorts Hornblower to Court, was an actual British diplomat.  And of course, the Prince Regent and the Duke of Clarence (who Forester describes deliciously as “pop-eyed and pineapple-headed”) – they’re in there, but they are very minor characters.

In Commodore, by contrast, Hornblower meets several notable historical figures, and they are essential to the plot.

Early on, he meets with the British Foreign Secretary, the Marquess Wellesley, who was in fact the brother of the Duke of Wellington, though he never had a sister named Barbara.

Later, Hornblower meets the Czar of All the Russias, Alexander I, on two occasions.  First, at the grand ball, where he is almost shot by the revengeful Finn, Braun; and again on board the Nonsuch, where, incognito as the Comte du Nord, he dines on standard ship’s food to the great alarm of Lt. Bush.

Many of the characters in the diplomatic service in the book were real people, too.   Kochubey, the Grand Marshal of the Peterhof  Palace, was real; your own Prince Bernadotte, of course; Ambassador Cathcart in St. Petersburg; and Minister Merry in Stockholm; they were all real historical figures.

Minister Anthony Merry was Britain’s ambassador to the United States before he was posted to Sweden.  President Thomas Jefferson didn’t like him, and he greeted him on his arrival in the United States by wearing casual clothes and bedroom slippers, which caused Merry to complain to Secretary of State James Madison.  Merry eventually became disgusted with America, and even conspired with the arch-villain Aaron Burr to try to take the Louisiana Territory away from the United States.  For that he was recalled to Britain by the Foreign Secretary.  So when Lord Wychwood comes aboard the Nonsuch and says to Hornblower that Cathcart was “worth two of Merry at Stockholm,” he knew what he was talking about.

And what about HMS Nonsuch itself?  There were in fact several British warships named Nonsuch, but none during the Napoleonic wars.  Nonsuch in modern days has come to be a generic name for an anonymous ship, sort of like saying  HMS Whatever.  In the United States Navy, we say USS Neversink.

I have tried to identify the young Prussian lieutenant von Bulow, who is captured in Daugavgriva, with one of the two well-known Prussian generals of that name, but the chronology doesn’t fit.  So maybe he is no more than an ancestor of the British/Danish socialite and accused wife-murderer Claus von Bulow.

I was also prepared to say that Baron Basse, Count Dumoulin, and Consul Hauptmann were fictitious characters; but I saw all of them yesterday afternoon aboard the Tre Kronor.

But this is just a foretaste.  When Hornblower’s fleet arrives off St. Petersburg, he is in the thick of genuine historic figures.

There was a real Ivan Nikolaevich Essen, Military Governor of Riga.  He was a Lt. General in the Russian army who had fought in Poland, in Holland and in Russia.  He was wounded at the battle of Friedland, and was indeed the Governor of Riga in 1812.  Essen is best remembered by historians for ordering the burning of the suburbs of Riga in an attempt to stop the Prussians, but the wind changed and the fire burned much of the city.  The following year, he went for treatment at the sulphur baths near Riga, where he either drowned while swimming or, according to one version, committed suicide on the anniversary of the burning of Riga.  His portrait is in the Hermitage in St. Petersburg.

The other Russian who figures prominently in the Riga chapters of The Commodore (besides the seductive  Countess Canerine, who so far as I can tell, is entirely fictitious), is General Hans Karl von Diebitsch, a German soldier who served as a Russian Field Marshal.  Forester calls him a Pole, but he was born in Silesia, which didn’t become Polish until after World War I, and he was educated in Berlin.  His father had been an aide to Frederick the Great, and had himself joined the Russian Army.  Diebitsch was wounded at Austerlitz, and fought at Eylau and Friedland (where Essen was wounded).

Diebitsch was indeed present at the defense of Riga, where he participated in the turning point of the campaign.  Later, he was with the Russian troops that entered Paris in 1814, and he attended the Congress of Vienna.  After that, he was in charge of the campaign that defeated the Turks at Adrianopol in 1829, and he commanded the Army that suppressed the Polish revolt in 1830, though he died soon after of cholera.

Probably the best-known of the characters Forester places on the scene in Riga is Carl Philipp Gottfried von Clausewitz, the very Clausewitz later famous for his theories on war.  Clausewitz was a Prussian who fought at Jena, was taken prisoner and was held in France for a year.  When Napoleon conscripted the Prussian Army to join his forces, Clausewitz left the Army, joined the Russians, and fought against the French at the battle of Borodino.  He was in Riga at the time of the siege, and he helped negotiate the armistice by which the Prussians changed sides.  That armistice is known to history as the Convention of Tauroggen, and it was signed by Diebitsch for the Russians and General Yorck for the Prussians.

Yorck is the general that Hornblower meets on the battlefield at the very end of the book, and convinces to change sides.  He was a real person, too, Johann David Ludwig Graf Yorck von Wartenburg.  Yorck had a history of (shall we say) flexibility in his loyalties.  As a lieutenant in the Prussian Army, he accused his superior officer of looting, and he was dismissed and imprisoned.  After he got out of prison, he joined a group of Swiss mercenaries who were fighting for the Dutch, and he fought in the East Indies.  He didn’t return to the Prussian Army for another 8 years.  When he did, he gained distinction at Jena, and he served under Marshall MacDonald, the renegade Scots general who led the French in the Riga campaign.  When MacDonald retreated before the Russian Diebitsch, Yorck was isolated, and he was vulnerable to the approach made by Hornblower — or if you must believe otherwise, by Diebitsch and Clausewitz.  Yorck signed the Convention of Tauroggen, and barely escaped a court-martial for it.  He was ultimately absolved when Prussia declared war on Napoleon, and he fought with Blucher in the Waterloo campaign.  He was eventually made a field marshal, and there is a statue of him in Berlin on the Unter den Linden.

There is considerable evidence that he was.  Anthony Price has written a non-fiction history of frigate captains called The Eyes of the Fleet, in which he describes the careers of Cochran, Pellew, Hornblower, and others, with equal seriousness and scholarship, and he gives no hint that Hornblower is made up.  C. Northcote Parkinson, of course, has actually written Hornblower’s biography, which even has footnotes, so it must be true.  And, maybe most convincing of all, Gregory Peck played Hornblower in a movie, just as he played other famous historical figures, including Abraham Lincoln, Douglas MacArthur, and even King David.  And if you can’t trust Gregory Peck, you can’t trust anybody.   Or perhaps more to the point in this company, we know Queen Christina existed, because she was played by Greta Garbo.  And Joan of Arc, who was played by Ingrid Bergman.  So, I think that there is enough evidence for those of us in this room to conclude that Horatio Hornblower really existed, just like those other famous historical heroes who really existed, Sherlock Holmes, James Bond and Pippi Longstocking.

One response to “Hermeneutics”